To put a cap on an exciting American Pharmacists Month, this week, OPA Director of Strategy and Practice Transformation, Stuart Beatty presented at the Centers for Medicare & Medicaid Services’ (CMS) two-year anniversary of their Patients over Paperwork initiative. CMS Administrator Seema Verma provided opening remarks, followed by Representative Michael C. Burgess and Representative Larry Bucshon, who are both physicians in addition to their key roles in Congress. Three clinicians presented on the impact of the Patients over Paperwork initiative, two of which were pharmacists.

Administrator Verma’s remarks highlighted the Trump administration’s focus on reducing paperwork and administrative loads in healthcare. She explained, “Regulations should identify expected outcomes, results and standards – not micro-manage everything the health industry does.” 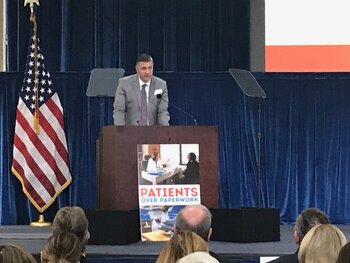 Beatty spoke soon after Verma about the importance of streamlining patient care and eliminating wasteful administrative work in an effort to reduce, “burden in order to provide greater focus on patient-centered care, innovation, and outcomes.”

The most impactful of Beatty’s message included the stories he shared of patient encounters and the positive affect of pharmacist-provided care. At The Ohio State University Division of General Internal Medicine network of patient-centered medical homes where Beatty practices, pharmacist-provided care resulted in one patient with diabetes having their hemoglobin A1c going from 12.5% to 8.3%. He also acknowledged another patient visit where he was able to increase access to naloxone in a patient with a long-term disability being treated with moderately high-dose opioids. These were just two examples of many that could have been shared that highlight the instrumental role pharmacists have in driving positive patient outcomes.

“When I speak at multi-disciplinary conferences, the issue has not been on what pharmacists can do to help, but rather how can practices find a way to resource their involvement,” Beatty said. “I encourage CMS to facilitate sustainable mechanisms for inclusion of pharmacists in team-based models.”

CMS Administrator Verma appeared to respond favorably to this call to action. Answering a related question from a reporter of whether CMS was considering provider status for pharmacists under Medicare during a press conference, she stated, “That was something the president mentioned in his executive order, Medicare executive order, that’s one of the changes I think we’re looking at … I think you’ll see in this year’s rulemaking there are a few proposals out there about creating more flexibility and allowing providers to operate to the top of their license.”

Verma added, “As part of the executive order we’re going to look more closely at this next year, as well, to look at this across the board to see what we could do, even more. The idea here is, based on the challenges that you all are facing, we need to create better accessibility and we need to make sure that we have providers on the front lines, and I think that regulations have been a barrier often to that.”

Beatty was quoted in a follow-up story in Inside Health Policy, saying “pharmacists would love to help in rural areas, but with the way the incentive structures are currently set up, pharmacists aren’t really utilized as anything other than a dispenser of medication.”

OPA would like to thank the American Pharmacists Association (APhA), and Anne Burns, Vice President of Professional Affairs at APhA for their leadership in organizing pharmacist’s representation at the CMS Patients over Paperwork initiative. To check out APhA’s write-up on the event, click here.

“I am proud to see Stu Beatty already making waves nationally for his work in Ohio to increase patient access to pharmacist-provided care,” said OPA Executive Director Ernie Boyd. “OPA’s board of trustees has made a worthwhile investment to ensure we are positioning pharmacists for the future, and we are excited to take our statewide provider status push to the federal level.”

Change is coming fast in the profession, and Ohio pharmacists are making waves that could result in significant difference in pharmacy for generations to come. Share your excitement and get the word out about the work being done in Ohio through using the hashtag #OHprovideRx on social media. If we come together and work collaboratively with our healthcare team members, we can create a world where more of our fellow citizens have access to the high-quality care that they deserve.

Thank you Dr. Stuart Beatty, Dr. Ryan Whisler, and PA Roger Wells for sharing how burden reduction is a critical issue to clinicians across our country, and their own personal experiences on the impact of #PatientsOverPaperwork! #PoPForward2019 pic.twitter.com/AQJfqWibhR